Rihm's music has scampered around in my head since last week, hunting for forms, chasing, searching. Maybe I'm the one chasing its form, hunting its secrets. Pamela Drexel, a friend and Helicon board member who was in attendance, specifically mentioned the virtuoso chase between English horn and viola (played by my friend since Juilliard, Daniel Panner). Other Helicats in attendance were sculptor, Ryo Toyonaga, and board member, Karen McLaughlin.

Excerpt (of some personal interest, ahem) from the Times review by Allan Kozinn:

"Jeffrey Milarsky led the Manhattan Sinfonietta in an energetic performance that . . . was the picture of ensemble virtuosity." 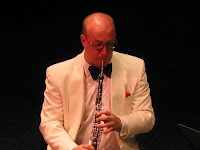