Because there are so few notes to play, the English horn part in Verdi's Falstaff offers plenty of time for sitting and listening. The first entrance is 20 minutes into the opera. It lasts for about two minutes and then there is nothing for an hour and a half (depending on tempi, rubato, etc.), which is not a bad thing in such a fascinating piece. Verdi's score overflows with delightful details. Some of these musical devices propel the story or comment on the action, many, on the other hand, are simply there for pleasure, both for the audience and the performers. Even after dozens of performances, I find new delights and relish familiar ones.

On Friday afternoon, my friend Joan Easton and I went through the Asian art galleries that overtook the Fuller Building for Asiaweek 2008. The 17th-century Indian miniatures in Francesca Galloway's gallery are breathtaking (you can see them until March 27, 2008). A small picture of a nilgai by a Mughal artist (c. 1610-12) captivated us. Joan, pointing out the array of intricate details in the background, imagined the pleasure the artist must have took in adding fanciful touches, a bird here, a branch there. 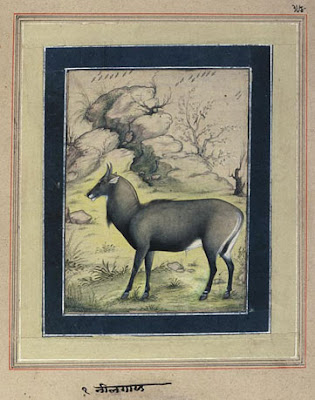 As I sat in the pit of the State Theater yesterday afternoon, with Falstaff going on all around me, I thought about the picture of the nilgai and Joan's comments. The musical pleasures were so delightfully complex as they danced throughout the orchestra, all I could think about was Verdi's pleasure in creating them. He must have thought about various musicians he knew, and those he never could, enjoying the aural spectacle he created.