This evening, after rehearsing "new music" in Brooklyn (a combination of words that can strike fear into the hearts of old-fuddy-duddy musicians who still live on the increasingly unaffordable and decidedly Starbucks-ridden Upper West Side), my dear friend Marianne Gythfeldt and I had dinner in one of my favorite restaurants, Olea in Fort Greene (171 Lafayette Avenue, Brooklyn, 718-643-7003). My meals there turn out consistently to be among the finest I've eaten anywhere. (Do not miss the halloumi cheese or the dates stuffed with almonds and wrapped in bacon or the roasted eggplant . . . mmm. Or the white mango sangria!)

Eating at Olea means a long trip home to West 106th, but the MTA seemed to be up to the task tonight, and the No. 3 express train sped from Atlantic Avenue through lower Manhattan to West 96th Street in what felt like just a few minutes. There I emerged from the frigid, air-conditioned train onto a hazy, hot platform, strangely crowded for half-past eleven on a Monday night. It was also strange for the mercury to near three digits on an early-June evening. Sometimes New York City is just strange, you accept that.

Suddenly the platform loud speakers erupted in multiple announcements. Utterly indecipherable, overlapping ululations of glossolalia, commanded us, warned us, informed us, of WHAT? Of nothing, because the train noise and the simultaneous blatting from the speakers voided any message. It was too hot to care . . . and then a voice did emerge from the din: "Last stop on this No. 3 express, last stop, last stop, EVERYONE OFF this train."

The train cars hotly coughed out their contents and the platform teamed with people.

We awaited the No. 1 local. We hoped the No. 3 would move on to the train infirmary, making way from its replacement. It was too hot to be rubbing shoulders with dozens of sweat-drenched strap-hangers at a quarter-to-midnight, but it was too hot to walk home.

The No. 3 never moved. It only roared unanswered complaints, doors closed, cars empty, lights ablaze. A No. 1 train finally did roll up, jammed with passengers. 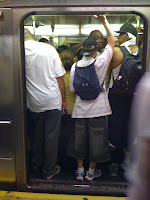 When its doors opened, no one got out; not a single person got on. As if having told a joke that falls completely flat, the train sat with doors ajar while hundreds of people stood, motionless, just hoping it will go away. It was a moment of total MTA impotence: an empty train out of service on one side and a full train stalled on the other, with hundreds of people sweltering in between.

I left. It was too hot not to.

Luckily, the M104 bus was right there. Before me on line was a young man with an immense tuba case. Once he got situated in his seat, I stopped in the aisle beside him. I couldn't resist. Referring to my tiny (especially in this context) oboe case, I quipped:

"Don't you wish you played the oboe?"

"My brother played the bassoon, so I know what it's like."

"Oh, so you shared a fraternal clef."

"Yeah, we kept it all in the family."

"So did we. My brother played the flute, but being the smart one, he started a plumbing business."

At this point, we arrived at West 106, so I said goodnight. Some strange things you just have to accept.