Context—In and Out of the Cage

The other evening, my friend, Pedja Muzijevic handed me an advance copy of his wonderful, new CD on Albany Records, "Sonatas & Other Interludes." You can pre-order your copy from Amazon by clicking here.

The ingenious conceit of this recital is its form. 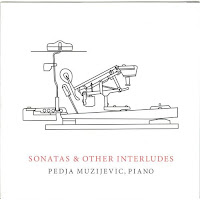 The title references Cage's cycle "Sonatas and Interludes," which groups 16 Scarlatti-sized sonatas interspersed with four interludes, all played on "prepared piano." Pedja has chosen eight of Cage's prepared-piano sonatas and places them between works (the "Other Interludes" of the title) by Scarlatti, Liszt, W. F. Bach, Schumann, Strauss, and a Chopin paraphrase by Michalowski. In this context, the Sonatas become the Interludes; those kind of inversions would certainly have delighted John Cage. In a surprising sense, the CD presents two recitals superimposed, which is not unlike the way Cage and Merce Cunningham worked.

As a musical programmer, I have been continually impressed by Pedja's innate sense for contextualizing music of disparate periods in ways that compliment and enhance. Fans of his series, The Movado Hour, will have many memorable examples at the ready. In this recording, the tart, concision of Cage's sonatas—not to mention the altered timbre of the "prepared piano"—acts as citrus palate cleansers between courses of a well-planned and well-executed meal. Pedja and I were both close friends of the late Albert Fuller who often discussed musical programs in terms of fine menus, and indeed Pedja uses this metaphor in the personal note that introduces the program. As for the performance, Pedja plays beautifully throughout, deftly moving through some three centuries of musical styles with ease and dexterity. The distinctness with which he presents each historical period is so natural, one almost forgets the sophistication this kind of musical thinking requires.

Another notable aspect of this CD is its theatricality. Were this a live performance, the performer would require at least two pianos on stage and, of course, the para-musical work of altering the entrails of one of them for the Cage sonatas. The intricate manipulation of the piano required for the Cage works elicits some fine insights in Pedja's program note:

"Sonatas and Interludes includes instructions not found in any volume of Czerny études. The performer is asked to 'prepare' the piano by inserting screws, blots, plastic and rubber into the strings. It is all too easy to note that Cage's instructions are wonderfully explicit and vague at the same time. It IS John Cage after all! However, the same can be said for Beethoven or any other composer. It is exactly that vague, gray area that makes us play the same works over and over; precisely because there is no definite 'truth.'"

In his program note, Pedja disabuses us of the notion that this recording has an "underlining story, title or subtext," and I certainly won't quibble. However, as I listen again and again to this CD, at each work's ends, my ear yearns for the next unexpected sound. The recital is a page-turner, a cliff-hanger. This listening experience is quite outside the classical-music norm, and works like the finest story-telling. Its juxtapositions open unexpected vistas, and you never end up where you thought you would. How often can you say that of a piano recital?

One bit of acknowledgment is due: the recording is made possible through the generosity and vision of Jim and Yukiko Gatheral.

Now, go get yourself a copy. Don't deprive yourself!

(Photo credit: the portrait of Pedja is by fashion photographer, and friend, Bell Soto.)
Posted by James Roe at 10:14 PM

Sounds good enough to eat!
It is now on my official wish list.