These concerts are part of a live recording project for SONY CLASSICAL. 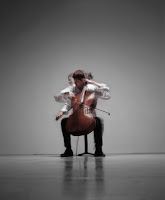 JAN VOGLER has become one of today’s most sought-after cellists. He is known for his decisive musical concepts and singing playing style. During the last years he won a large following in regular performances, and acclaimed recordings. He started as principal cellist of the Sächsische Staatskapelle Dresden but left the position in 1997 to fully concentrate on his already successful career as a soloist. Since then he has been playing with major orchestras and conductors worldwide. In November 2005 he gave his debut with the New York Philharmonic and Lorin Maazel as part of the reopening of the historic Frauenkirche in Dresden. In October 2006, he received the European Cultural Award in Dresden from the European Foundation for Culture.

Founded by brothers Colin and Eric Jacobsen, THE KNIGHTS, are a fellowship of young musicians of diverse and accomplished backgrounds who come together for the shared joy of musical exploration. "A little orchestra of some of New York's best strings-about-town," (The New Yorker), The Knights have brought audiences varied and and engaging programs consisting of masterworks from all eras, world premiers, collaborations with jazz artists, singer-songwriters, and arrangements of folk music from different world traditions in their quest to bring new light to old works and new work to light.
Posted by James Roe at 8:15 AM