Ryo Toyonaga at The Vilcek Foundation

From 18 March to 15 May 2009, The Vilcek Foundation presents an exhibition of eighteen ceramic-based sculptural works by Ryo Toyonaga, curated by Midori Yamamura. Created in the seclusion of a cabin in the Catskill Mountains from 1991 to 2003, these works seem to arise from both organic and man-made sources. To contemplate these objects pulls the mind through the paradoxes of appearance and reality. This duality between archaic and contemporary, of organic and constructed, brings to mind the similar duality in the best work of Martin Puryear. As either fossils from the future or distant past, the question is unavoidable: How did these things come to be? And the corollary question, Why can't I take my eyes off of them? The creative impulse that birthed this work—and their organic quality makes the metaphor of birth particularly apt—had to have been a well-spring, the sculptures in this show were selected from a body of 300 pieces.

Each is a perfectly conceived unity, almost with its own DNA, making sense by the force of its own presence. We all have thoughts, fantasies, obsessions, whose force on our lives is as powerful as any physical object; sometimes these unseen forces are stronger than reality. Toyonaga has given form, shape, and physical presence to the actors of our unconscious theater, and offers the chance to confront them face to face.

•
From part 15 of Esthétique du Mal by Wallace Stevens

And out of what one sees and hears and out
Of what one feels, who could have thought to make
So many selves, so many sensuous worlds,
As if the air, the mid-day air, was swarming
With the metaphysical changes that occur,
Merely in living as and where we live.

Viewing from
Wednesday through Saturday
Noon to 6:00 P.M. and by appointment
Catalog available 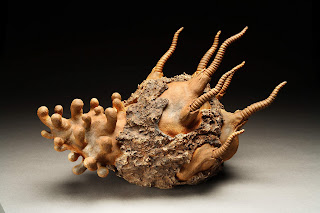 Hey, I enjoyed your blog. I wrote up a piece about the Ryo Toyonaga gallery at my blog. I'd really like it if you check it out and maybe leave me some feedback. http://bravenewworks.com/?p=22
Thanks! Take care.

This article is a high quality expression about what sculpture is. It symbolizes (in great prose) the evolution from state of mind to materialization. Thanks for sharing your appreciation.