I have a small painting by Franco Mondini-Ruiz called Woman Reading to the Sea. Actually, you could have one, too. He'll paint additional versions, "each of the same or better quality." (http://www.frederieketaylorgallery.com/)

The poet Lisa Williams was inspired by this image and has a poem by the same name published in the Spring 2006 Virginia Quarterly Review. I hope you enjoy them both. 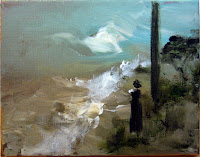 WOMAN READING TO THE SEA by Lisa Williams

After a painting by Franco Mondini-Ruiz


There’s a certain freedom in the long blue slant
of its uncaring, in the wind that knocks
the surface onto rocks, and there’s’ a dent

made in that wind by the woman who recites
straight into it, pretending the waves might hear
or that some larger being that is sea

or seeing hangs there listening, when sea air’s
so clearly full of its own gusts and grunts,
inanimate uprisings. In the line

of no one’s sight, her voice lost in the spray,
she feels a chilling freedom: how the foam
edges the sheets of zig-zag patterned water

while gulls’ shrill outbursts punctuate the sky
(one cloudy, sentimental phrase
or canvas brushed with amber, green, and rose).

What welcomes, and ignores, and doesn’t question?
Sheer emptiness. It’s like a husk
for her alone. It’s like a shell for absence.

Without an audience, she makes a noise
swallowed by waves and wind, just as
the waves themselves—or no, just like the drops

lost in the waves, which neither care nor keep
distinctions—sweep out a place
inside an amphitheatre she imagines

rising around her, with columns that crash
instantly, like the white foam that collides
and shreds its layered castles. Her words drift,

dissolve, and disappear. A crest
of words has surged and poured into the sea.
It doesn’t matter now what the lines say.
Posted by James Roe at 9:59 AM