Koolhaas & Lohengrin in a Beijing Taxi

Heading to the Beijing airport, our taxi driver spoke no English (and we no Mandarin), nevertheless, he was determined to give us a parting tour of the city. We spoke back and forth in different languages, the conversation moving quickly and incomprehensibly, articulated with brief moments of clarity. 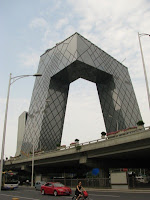 Our driver said as we passed the Dutch architect's delirious addition to the Beijing skyline. It was not the most practical vocabulary, but we were glad he knew it.

Then we passed a caravan of cars covered in ribbons. Our driver honked and waved and smiled and told us many things in excited Chinese.

We weren't getting it.

He wrinkled his brow for a moment and then sang, Treulich geführt. Of course! Gamely, we all sang along and waved at the be-ribboned wedding procession passing us on the highway.

As we sang, my mind raced between other instances of this melody in my life, from Beijing to Lima to backstage at The Metropolitan Opera.

Years ago, I played with an opera company in Lima founded by my Juilliard classmate, Miguel Harth-Bedoya. Some members of the opera orchestra were hired to play a wedding. In Peru, Mendelssohn's Hochzeitsmarsch is played as the bride processional, while Wagner's march accompanies the newly-minted couple's first stroll down the aisle on the way out. Richard Wagner and Felix Mendelssohn combined with South American Roman Catholicism in a Peruvian Baroque cathedral; playing "Here comes the bride" at the end of the wedding only enriched the admixture.

Years later, I would play in the stage band for Robert Wilson's contoversial production of Lohengrin at The Metropolitan Opera based in part on Japanese Noh Theater. The stage band musicians wait to play late into the night, there are hours between entrances. (It is actually possible to leave the theater and play a different concert during these breaks.) When the time finally comes, the musicians gather in the dimly-lit wings to play strains of Treulich geführt. Pretty lofty for "wedding gig," I thought, walking up the stairs backstage at The Met, another cathedral in its own right.

How could I have expected to find myself singing Wagner with a Chinese cabbie in Beijing, but I hardly could be surprised.

Would Wagner?
Posted by James Roe at 8:59 AM