There are two upcoming Knights performances next week in New York City.

After being rained out in June, The Knights return to the Naumburg Bandshell with a free concert perfect for a New York summer night in August. It's been a distinct pleasure to rehearse this week with Vera Beths who will both lead as concertmaster and play the solo part in Beethoven's eloquent Romance in F Major.

This concert celebrates the release of a new CD of Mozart Violin Concerti played by Lara and Scott St. John with The Knights conducted by Eric Jacobsen. 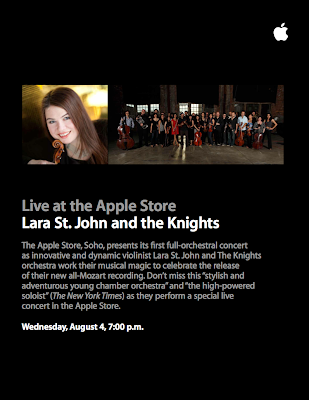