My first noisy week with the New York City Ballet in their summer home, Saratoga Springs, ended in the special silence of a Quaker meeting. Like a period punctuating the end of a long sentence, it was a diminutive dot with the power to stop roiling thoughts and complexly reasoned arguments in a tiny drop of ink on a page.

The Saratoga Monthly Meeting of the Religious Society of Friends was established before 1765 and their building in the small country village of Quaker Springs, was erected in 1795. The meeting house is little more than small room with wood floors and wood ceilings. The wall facing the doors is light blue, the others white. The white-painted pews transmit other Friends’ movements down the line. People sit close together and there is little anonymity. If you scratch your head, people will hear.

The meeting was well-attended and proceeded differently than the 15th Street meetings I’ve attended in New York. There, Friends arrive early, the silence well underway by the official start time. The Saratoga Friends sit and talk quietly until 10:00 when the meeting begins. The power of this concentrated gathering of silence caught me off guard. Like the gentlest caress, it felt deeply meaningful. 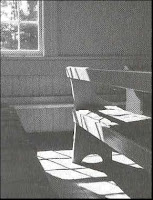 The components of this silence were familiar, birds, cars, dogs, children, floorboards, and coughs. The light streaming in the windows was from the same source as that streaming into other meetinghouses. The difference was in me. As I grow to know this silence, to find more in it than before, to lean into it, the more grateful I am to the Quakers for offering this point of repose for busy ears, mind, and heart.

Twice this week, I went into the SPAC audience to watch performances of Apollo (there are only strings in Stravinsky’s score). As the work unfolded, I realized that the moment “I had been waiting for” was the one I was in. Surrounded by strangers, confronting the genius of Balanchine and Stravinsky through the virtuosity of the performers, the artistic and intellectual stimulation brought me into a heightened state.

This morning, meeting with Friends I didn’t know, in a humble, quiet room with white walls and no ornamental display, another door opened, promising other rooms.
Posted by James Roe at 11:13 PM