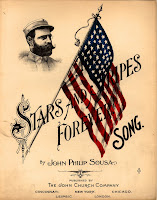 It was a good week for John Philip Sousa; the first week of July usually is. The music of this true American genius is so finely wrought and of such sincere sentiment, that it withstands every sort of performance, repetition, rearrangement, marketing bastardization, political co-opting, and even assault. It weathers all without diminution of its power to move us in body and spirit. Sousa’s marches are formally perfect without feeling formulaic, easy to appreciate and yet intricate in detail, patriotic, optimistic, blue-skies-all-summer, and impervious to cynicism. In his review of the New York Philharmonic's Summertime Classics concert, New York Times, 5 July 2007, Bernard Holland states, “Sousa is what America wishes it were and only occasionally is.”

Harpsichordist, Albert Fuller, says that each musician has a seminal musical moment when a certain piece gave them the frisson, inaugurating their lives in music. My "frisson moment" came with the Stars and Stripes Forever. My Junior High band director, Lynn Hansen, planned a spring concert with this march played by the combined wind students in the school. 300 is the number I remember. Is that even possible? God bless any adult willing to put themselves in front of hundreds of junior high students armed with dangerous band instruments. To make this inspired idea work, she simplified the difficult technical passages for the younger players and rehearsed us in smaller groups all winter. Our first amassed play through in the gymnasium left me in tears, at 13! (This will come as no surprise to those who know me.) The power of the overlapping counterpoint in the final strain, combining piccolos, low brass, and melody simply overwhelmed me.

In the summer of 1992, I went on a tour of France with the Juilliard Chamber Orchestra. The sponsor, Jeunes musicales de France, set a grueling schedule of something like 21 concerts in 18 days. The repertoire included Beethoven’s first symphony, Pulcinella, a ballet suite by Rameau, Copland’s’ Quiet City (Kelly Peral was the English Horn soloist) and our encore was Stars and Stripes Forever. This was a time before American imperialism turned us into the international pariahs we are today—Albanian pro-Americanism notwithstanding—so our unabashedly patriotic encore was enthusiastically received. In fact playing this most authentic American music abroad was a special thrill. Time after time in the joyously clangorous din of the finale I could hardly play for the upwelling of emotion. As I gamely pantomimed my part, I witnessed the sheer joy this music produced in each concert hall from Salle Gaveau to dozens of small theaters across France. The cheers that greeted us were the loudest I’d ever heard at a classical concert. In a sense it was the most meaningful piece we played, brimming with youthful enthusiasm and American razzmatazz.

When asked why he chose to choreograph a ballet to Sousa's marches, George Balanchine replied: "Because I like his music." 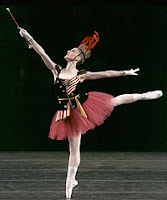 In the first week of the Saratoga season, the NYCB gave three performances of Balanchine’s 1958 ballet “Stars and Stripes.” Even in Hershy Kay’s benignly bastardized version used by Balanchine (with its parlous lurches into camp), the piccolos and the low brass still deliver the frisson. While playing the march’s famous final melody, there are joyful moments of uplift entirely devoid of irony, and they still dazzle.
Posted by James Roe at 8:02 AM