Conductors have been much in the news lately. Their job is among the oddest in music; the instrument they play is silent. One cannot learn to conduct alone. Instrumentalists spend large portions of their lives utterly alone in the discipline we call practicing. Conductors must learn their craft standing before an orchestra. Their craft comprises stick technique, interpretive communication, and leadership. At Juilliard, I used to call it "the three T’s": time, taste, and tact.

Today we ended the rehearsal week for the Mostly Mozart Festival. I am very fortunate to be playing in the Festival Orchestra for the whole summer. I have subbed in the orchestra from time to time since 2004 when Zéphyros played the Mozart Symphonie Concertante on the opening concert.

I have learned more from the Music Director, Louis Langrée than any other conductor. If this week is any indication, this is going to be an exciting month. To those of you in New York, I highly recommend the stage level seats in the reconfigured Avery Fisher Hall. I can think of no better way to experience orchestral performance than to sit so close that you’re almost in the middle of the ensemble.

This week we concentrated on Beethoven Symphonies 5 & 6. These pieces are played so often, they bring with them the kitsch of pop-culture commonness. The chill of the chilling opening motif in Beethoven 5

is most often relinquished to familiarity. Expectation for the known is perhaps the most common way we hear "classical" music, but the concert we're preparing was the occasion of the premier of both these symphonies. Louis’ desire to reify the mysteries these works held on their first performance drives the rehearsals. Can we imagine Beethoven 5 without knowing its C Major apotheosis? Louis asked us to.

In rehearsals, his primary technical concerns are with articulation, harmonic awareness, balance, shape of the line, and handling of dissonances. In the first movement of Beethoven 5 he addressed a bass line in the celli and bassoons. It is a very quiet (pianissimo) passage and he wanted to refine a juncture between two notes. The movement is marked “Allegro con brio” but in this passage he asked for the kind of articulation used in a dolce (sweet, gentle) adagio (slow) piece. The result added a new layer of richness to the sound. He found ways of matching articulation styles between winds and strings and between different wind instruments that brought cohesion to the orchestral sound. At another point he asked us to emphasize the rest or silent part of the music. How can you emphasize the silence? I’m not sure, but when we all tried, the result was electric. Another quizzical admonition was made to the wind section. We had forte (loud) chords on the downbeats. He asked we play them “faster.” Faster is not sooner or shorter; it’s not louder, what exactly could he mean? When twelve musicians tried to solve this impossible request, the result was a totally different and arresting sound on those chords.

These koans become cairns in performance: reminders along the way to creating an interpretation. It’s going to be a great festival. Try to come. You'll be glad you did. 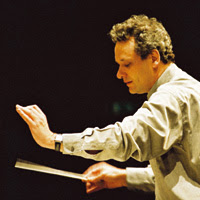