This summer, while up at Saratoga Springs with the New York City Ballet, I visited the Tang Museum at Skidmore College and was pleased to discover the work of Joshua R. Marks. Joshua is trained as a sculptor and works also in photography. His work deals with perspective, size, vantage point, and plays with the expectations surrounding these elements.

In the Tang exhibition, hung six photographs in large frames made by the artist. The series was titled "Honest Landscapes" and I was immediately drawn to them. The subject of these landscapes, I came to realize, was New York City pavement, 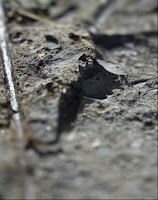 shot so close (inches from the ground) that the image could read as either immense or tiny, near or far. Manipulating elements of focus, the artist further affected viewer's perception of perspective. What were we seeing, a mountain or a tiny rock?

Visiting the works over the course of my two-week stay, I came to see that the beautiful, but quizzical frames told their own story. They suggested the interior wall and passenger window of an airplane with perfect details: the sloping concave shape, the color, and especially the representation of the window through which we see the photograph. Not only is the window's shape perfect, but there are two panes of glass (plexi, actually) with that tiny pinprick one finds near the bottom of such windows. The illusion is masterful without being over-done. In fact, the sculptural elements are in many ways, more realistic than the image contained within. The "Honest Landscapes" exist both as sculptures and photographs, blurring perspective, size, and proximity, in a conceptual whirl. What would it mean to look out a airplane window and see mountains rising—at once tiny and enormous—only inches above the Brooklyn pavement? In these works, Marks combined visual beauty with technical polish and conceptual slight-of-hand, even the title plays into the conceit. By accreting layers of illusion, he created six very strong works.

I contacted the artist to find out whether the works might be available. They were, and the process of choosing between the six was exciting. I even involved my parents in the process on their visit to Saratoga for my 40th birthday. It was a sight, the three of us, rushing around the exhibition, comparing, looking, talking about the works. Though I had to choose but one, I could imagine a space where all six might be shown in a row, taking the airplane window illusion to new heights. (Any collectors with big spaces reading this?)

I chose the sixth in the series, and when the Tang show ended, I paid a visit to Joshua's studio in Brooklyn. His wife was there assisting, and we three spent the better part of an afternoon talking and looking at Joshua's work. Totally delightful. They even drove me back to Manhattan with my new piece, talking about opera most of the way back.

I've tried to photograph the work to show its frame. I'm not sure I've succeeded, but I hope you get an idea. 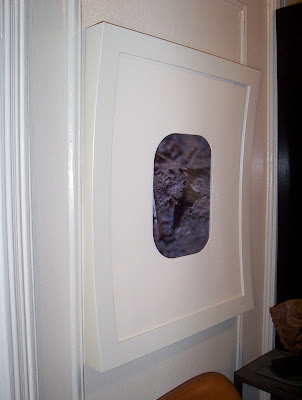 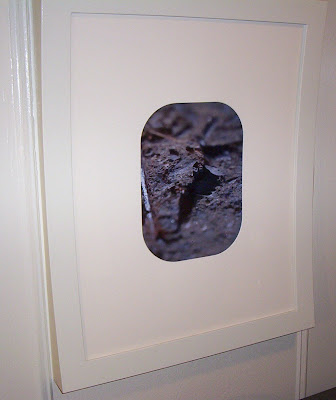 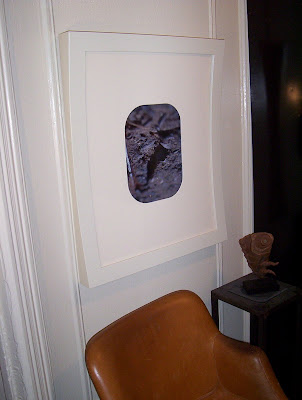 Jim -
Again I enjoy a delightful evening treat before bed as I read you latest blog entry. Ah yes, I do remember us excitedly moving between the works of Joshua... stepping close... moving away... observing and wondering. As much as I enjoyed his works, the most satisfying aspect was sharing the moment with you.