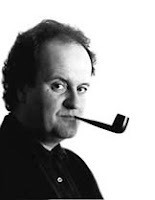 In three weeks we start rehearsals for the US premier of this hour-long chamber symphony. The concert is Thursday night, 18 October, as part of Miller Theater's dynamic, "Composer Portraits" series. I'm playing the solo English horn part and, well, it is very difficult. (My neighbors must think I've lost it . . . I began practicing this morning with the poised 1st oboe part to Don Giovanni which I'm playing tomorrow at the NYCO matinee. The post-lunch repertoire is of an entirely different stripe.) I love Rihm's music. His rhetoric is powerful, and utterly persuasive. His mastery of harmony, timbre, and counterpoint keep the ear riveted.

Repetitive practice of the sort I've been doing today, integrates the mind and body, dispersing the music throughout muscles first, and then brain. In fact, the body processes certain material faster than the mind can. Its athletic adeptness beckons the brain to catch up. (Jock to the nerd: "Come on, let's play ball!") Learning to let the mind trust the body is one of the great lessons of practicing.
•
Below are the first two of an eight-page passage with
the English horn playing the principal line.
It begins one beat before bar 161 and
clips along at eighth note = 144. 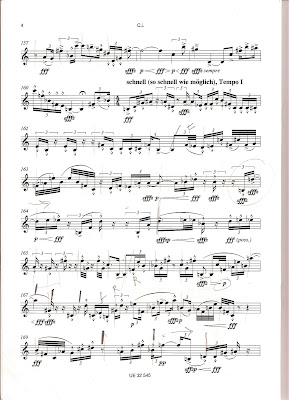 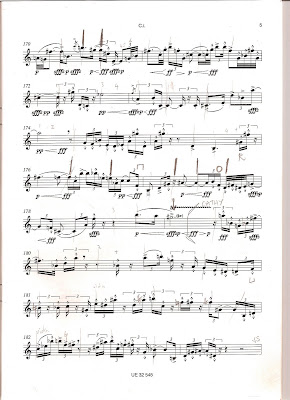