Last year at this time I was playing at the Moab Music Festival, Michael Barrett and Leslie Tompkins' wonderful month of chamber music in one of

America's most arresting settings. No oboes this year, so I'm in the pit of the State Theater rather than crossing the Colorado on horseback. But I did wear my Moab hiking shoes today when I walked the two miles from West 106th to Lincoln Center for the dress rehearsal of New York City Opera's "Opera For All" opening night gala. The terrain was less challenging than what I encountered in Utah, but Central Park West is, in many ways, its own reward.

I wrote the following remembrance for the festival's winter newsletter.
•

One Sunday morning last November, I got a call from Michael Barrett asking me if I might like to perform in the Moab Music Festival the

first two weeks of September 2006. He told me who the other musicians would be and the musical programs and I instantly said yes. The music, masterpieces of Bach and Mozart, and the musicians, the finest in the country, were incentive enough, even with no understanding of what Moab itself would add to the equation.

Of course, it takes a long time to get from Manhattan to the the desert.

Grand Junction’s tiny airport with its taxidermic bears and wild cats already felt like the “frontier” to me, but it was the final leg by car where I came to realize just how powerful and perfect a setting Michael and Leslie had found for their chamber music festival. It was a Sunday evening, and as I drove, the rocks and river made their first indelible impression on me. Lit with the violet shade of sunset, I began to see how utterly different this place was from any place I had ever been. And not only was it different, if you were open, it might just change you. Words like splendor, immense, and awe can merely describe the penumbra of Moab’s natural beauty.

The wonderful novelist David Mitchell in his most recent book “Black Swan Green” wrote that “if the right words existed, then music wouldn’t need to.” As I was to learn, Moab, like music, escapes descritption by words and is best experienced in the body.

My first week was given over entirely to the music of J. S. Bach; for musicians, he is our Shakespeare. The morning after our Grotto concert I woke up at sunrise. It was my first day off since arriving, and with strains of Bach’s Wedding Cantata in my ears, I set out to see Moab. I had my virginal hiking gear purchased in town and plenty of water, sunscreen, and a Moab Music Festival hat. I was ready. I had a vague idea of finding some petroglyphs on the other side of 70 that I had read about, but basically, I was open to whatever might suggest itself. I turned up 128 for the first time, the morning light clear and bright. 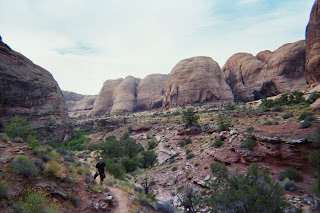 The Negro Bill Trail Head was the first thing to strike me, so at about half past seven, I started my first hike. For those of you who have been going to Moab for years, I hope you can still remember your first moment of enchantment there. This was mine. I had no expectations, only an openness, which was met with a rush of sensations as strong as any I’ve experienced. From the vast to the minute, my eyes breathed in the changing terrain in gulps, like a swimmer coming up for air after a long dive. My feet felt hungry to move in the landscape. At one point I sat on a flat rock in the middle of the stream

and listened and looked. I felt such amazement that music, which had brought me to so many places around the world, from Tokyo to Paris to Peru, had somehow also brought me here, to this canyon and to this stream. Moments like these are what a life is built around.

Of course the genius admixture of great music, virtuosic performers, and immense natural beauty was demonstrated again and again throughout the festival, but there was one moment which for me crystalized it entirely. It was during the last of the Grotto concerts.

The program included Mozart’s sublime quintet for piano and winds, which begins with three majestic chords, E-flat major, B-flat major, and back to E-flat. Michael’s inspired plan was to demonstrate the echo made by the canyon before playing the entire work. So when the audience was seated, we played each chord, waited for the echo to return to us several times, and then played the next and the next. The effect was extraordinary, like distant bells ringing out Mozart’s harmonies. After the demonstration, we begin our performance. Towards the end of the Adagio introduction, it began to rain and we took cover to wait for a change in the weather. At that point a woman walked up to me and said, “You know, I came all the way from Brooklyn for this concert.” “Well,” I answered, “ I came all the way from the Upper West Side.” We laughed about the chances of meeting so far from home. She then reached out and gripped my right arm and looked me directly in the eyes. “When you all played those chords and the echo came back . . . “ Here her voice broke and tears wet her cheeks. “I’ve never experienced anything like that in my whole life.” 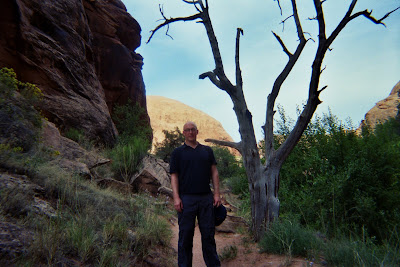 I love this! Mom