I started buying art before I became a collector. The first work of art I purchased was at The Southern Vermont Art Center in Manchester, VT, over a decade ago. I was there for the Manchester Music Festival, and quite unaware of what I might encounter, I walked into their galleries. Off in a corner sat a small abstract ceramic sculpture by Marion McChesney that grabbed my attention. It was $175, much more than I had ever spent on a non-useful item, but I was moved by it. Gentle and lyrical, I still love it. Though it was my first art purchase, it wasn't my first purchase as a collector.

In the 2004-2005 season I was invited to play acting-principal oboe of the Houston Grand Opera. I spent ten weeks in Texas, divided into two visits. It felt as though I was at a summer festival, away from home, expenses paid, I had no "real life" responsibilities aside from the opera schedule. Houston boasts America's third largest art market after New York and L.A. The Menil Collection and the Museum of Fine Arts Houston are great museums, and there is a lively gallery scene centered on Colquitt Street and in the Montrose district. I became a member of the MFAH and started going on my afternoons off. Showing at the time was a career retrospective of Kermit Oliver. Entirely unknown to me, I walked in one afternoon and thought, "Oh, this looks like Andrew Wyeth. It's quite nice." Well, it didn't take long before Oliver’s individual voice expressed itself and I was hooked. 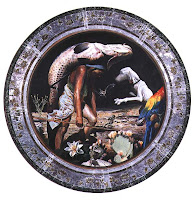 Virtuosic draftsmanship met imaginative visions, met literary and religious imagery; Oliver's work read like text. Photo-realism exploded into allegorical worlds that were instantly legible while promising deeper mysteries. I began attending docent-led tours of the exhibition, and one day a guide pointed to a particularly engaging work and said, " I could imagine living with this the rest of my life." I was startled by the idea, and intrigued.

With a little research, I found the Houston gallery that represented Kermit Oliver, Hooks-Epstein. I took a deep breath and drove to Colquitt Street. Bursting into the gallery, I walked up to the person who looked the most "in charge" (this was my first visit to a major commercial fine art gallery with intent to buy) and blurted out my confession: " I love the work of Kermit Oliver, and I wonder if you have anything in the price range of a new collector." The elegant, poised, Southern woman sitting behind a handsome wooden desk smiled and answered in a mellifluous mezzo-soprano, "I am so pleased to learn of our mutual admiration for the work of Kermit Oliver and that you've found your way to our gallery. What, may I ask, is the budget of this 'new collector'?" "$1000," I replied, gamely. "Oh, I am so sorry, Mr. Oliver's work demands a price many times higher than that. However, if you would like to view our inventory in the back room, I would be happy for my assistant to show you." It was a kind gesture to this "new collector," and I was thrilled to see more of Oliver's work.

While we explored the gallery's cache of significant paintings, I spied a small piece leaning on a shelf—a drawing—and I asked to see it. It was an original study on paper, pen and ink with acrylic wash about 8 x 12 inches. It pictured a coyote fatally subduing a lamb, a crane in flight overhead, oblivious, and, there were handwritten notes by Oliver in the bottom margin. Peeking, I saw that the price was within my range. "What's this?" I asked. The assistant didn't know, so it was presented at the front desk, where I learned it was a 1996 study made for a larger work the gallery sold years ago. The collectors hadn’t wanted the study, and it sat, seemingly waiting for me in the back room ever since. "I'll take it."

It displayed some of Oliver's major themes. Its title: LUSUS NATURAE or "game of nature,' expressed nature's ambivalence to one creature's fate in the face of the continuation of life. The sacrificial lamb's plight, agnus dei, is ignored by the crane flying overhead towards its own unknown end. Though depicting an assault, the picture doesn't feel violent. The artist's notes on the page add an additional layer of remove from the mortal scene while increasing the richness to the work itself.

With that purchase I became a collector. The docent’s idea of looking at a work for the rest of ones life came to life. Oliver’s study, now entirely separate from the larger work it preceded, hangs by my music desk. The oblivious crane, spared the lamb’s violent fate, suggests there can be found peace in the face of life’s tragedies and joys. What more can we ask? 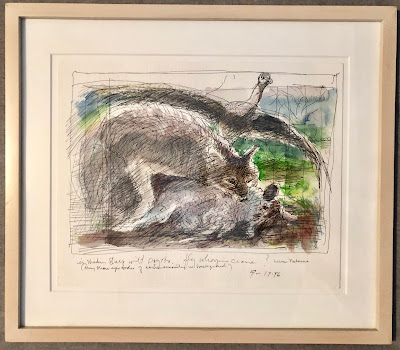 What a great story.

I've recently purchased a painting and wondering if it could possibly be an original Kermit Oliver. My painting is signed "K. Oliver 1965". Do you know what his signature looks like and if he signs on the front or the back? I'm just beginning my research and any info. you may have would be very helpful.

this response is for janetb...kermit oliver signs his paintings on the lower right front side of all of his art work as kermit oliver. however, he has been known to sign a few pieces, k. oliver.

mr. roe - i have just finished reading your story on your interest in kermit oliver's art work. your story itself is a masterpiece. your comment about his art work resembling andrew wyeth's tickled me because that is the one legendary artist he has always admired.

i wish you well.

Thank you so much for reading and responding to my post. I love your father's art work, and spent many, many hours walking through "Notes from a Child's Odyssey" while I was living in Houston. I look forward one day to seeing more of his work and maybe even adding another to my collection. His art has given me a deeper experience of my own life and a way to reflect on my experiences and emotions.

I apologize if this is a duplicate posting.

Thank you for your terrific story. I was lucky enough to have known Kermit when I was a little boy. Although I'm sure he doesn't remember me, I have always held Kermit in the highest esteem, both as a person and as an artist.

As to Janet's question about signatures-

I am sure that Kermit has long since settled on a style of signature, but there are several variations out there. We have several of Kermit's paintings from the 70s, and actually, none are signed "Kermit Oliver" or
"K. Oliver." Three are signed with "OLIVER" in either the lower left or right corners. A larger painting is initialed in the lower left corner with "KO." A portrait of my father is unsigned, as far as I can tell (I haven't removed is from the frame.)

Seems to me, though that 1965 might be a little early for Kermit. I could be wrong, though.