I was sitting in Café du Soliel (2723 Broadway at 104th Street) with chef/owner Matthew Tivy after rehearsal today. 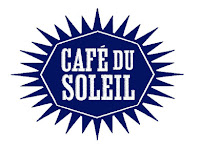 (He was an oboist in high school, and replaced the great Matt Dine in the school orchestra after Matt graduated.) We were talking about my Prokofiev/Jean-George idea and Matt said, "They both perfectly blend sweet and pungent flavors." This is exactly on the mark. Throughout the concerto, there are moments of such lush beauty that it almost enters the sound world of Rachmaninoff, however Prokofiev won't stay there. The music shifts back into more emotionally ambivalent territory and in so doing becomes somehow more true, if it's even possible for music to be true.

After the concert, as the wind players packed up our instruments and chatted, the wonderful principal flutist, Liz Mann, said that Prokofiev created, "profound tone colors." We were talking about a passage at the end of the first movement where interweaving melodies in the oboes, flute, and piccolo create a mystical cloud of sound through which the solo violin line moves. It's ravishing!

It is difficult to talk about music without metaphor.
Posted by James Roe at 11:09 PM