The Joy of Performing

Last night at Mostly Mozart we opened with Mozart's Serenade, K. 375, for eight winds, pairs of oboes, clarinets, horns, and bassoons. Sitting onstage with seven wonderful colleagues, sublime music to play, in a sold out Avery Fisher Hall, I realized there was no place on earth I'd rather be. The expectancy of 3000 audience members can be a great comfort. Bejun Mehta, who has the most commanding stage presence I've ever witnessed, once told me that more impressive than a virtuosic performance is the display of calm while executing it. Sometimes this calm just greets you with the applause as you walk on stage, washing away the outside world as you enter the performance realm. Focus, freedom, alertness, all shift into a new, heightened mode. Last night was such a time. We answered the applause with Mozart's beautiful E-flat major chord.

“At eleven o’clock at night I was treated to a serenade — and that too of my own composition. These musicians asked that the street door might be opened and, placing themselves in the center of the courtyard, surprised me, just as I was about to undress, in the most pleasant fashion imaginable with the first chord in E-flat.” [W. A. Mozart, Letter to his father, 3 Nov. 1781, describing a spontaneous performance of his Serenade in E-flat Major, K. 375.] 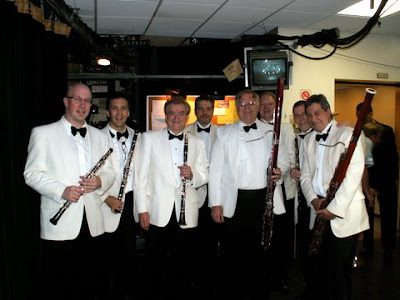