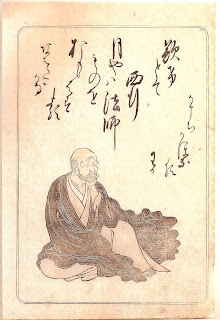 The next posting of my Shunshô prints is number 86 in the 100 Poets, 100 Poems series (Ogura Hyakunin Isshu). This poet is Saigyō Hōshi.

"Saigyō was a member of the Fujiwara family, an eccentric monk, and a famous poet, who lived A.D. 1115-1188. He was once in attendance on the Emperor, when a bird by fluttering its wings began scattering the blossoms of a plum tree. The Emperor directed him to drive off the bird, but the priest, with an excess of zeal, killed it by a stroke of his fan. On reaching home his wife told him that she had dreamt that she was changed into a bird and that he had struck her; and this incident made such an impression upon him, that he retired from Court, and spent the rest of his life as a monk." (Bio from "The Internet Sacred Text Archive.")

Should I blame the moon
For bringing forth this sadness,
As if it pictured grief?
Lifting up my troubled face,
I regard it through my tears.

The moon to me now
Is a thing to be deplored,
Forcing me to think
Till my face grows drawn and tense,
And I feel the tears begin.