When harpsichordist, Albert Fuller reminisces about performances with Swiss tenor, Hughes Cuenod, his eyes mist up, “Dear, we improvised everything.” Hughie and Albert share a friendship that extends deep into the last century. I recommend the book, "Hugues Cuenod With a Nimble Voice: Conversations With Francois Hundry (Lives in Music, No. 1)" that Albert translated in 1999. Hughie's joy in life is irresistible—I'm sure we all could benefit from more of it.

I had heard so many wonderful stories about Hughes Cuenod as Albert's student, that when the Juilliard orchestra went to Evian, France in 1991, I made the pilgrimage across Lac Léman to meet him and his partner, Alfred. 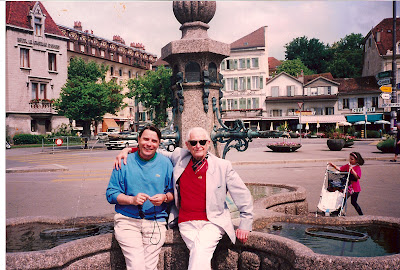 This photograph was taken that morning. Hughie here is a spry 90. He turned 105 two days ago, and has married (unioned?) Alfred, as Swiss law now permits civil unions without gender discrimination. (Thank you to Alex Ross for the birthday posting on The Rest is Noise.)

As I walked to our meeting point, I realized I didn't know how to recognize Hughie having only heard stories and recordings. All I knew was that he was a very tall, lean, gay, Swiss, tenor, and that would have to be enough. Approaching the café, I saw a dashing gentleman in sunglasses sitting cross-legged on a small folding chair, his breast bright red under a seersucker jacket with a brilliantly colored scarf around his neck. Absently, he dismantled a croissant for two or three prattling birds.

Midway along our road sometimes a voice
Sounds, prohibiting all heldenblustering choices

Of timbre, overtones or fashions;
Fifty years back, when I first heard you sing
I thought: “The poems I’ve written lack for nothing

But such clarity, such passion.”

With Nadia Boulanger when young, you went

Touring through languages and continents,

Collegia, festivals and venues;
To countertenor from youth’s baritone,
You made each form, period and style your own,

Tasting your way down this art’s menu.

Then Fauré, Debussy, Auric;
Di Lasso to “A Lover and His Lass,”
Josquin to Stravinsky’s Rake’s Progress.

With an untroubled, easy grace and verve,
You’d fill in for a friend whose wrenched-up nerves

Failed, sang through 60 years unchanged
By travel, time or untold cigarettes.
At 85, you called your debut at the Met

“A little bonbon after lunch.”

“How could I lose my voice,” you were known to banter;

“I never had one”—just a dry, white, unmannered

Mask tone with the bel canto breathing
That carried your song’s deep impulse truly
From mouth to nerve ends like a fine, rich Pouilly.

Why not just say: one voice for all seasons. 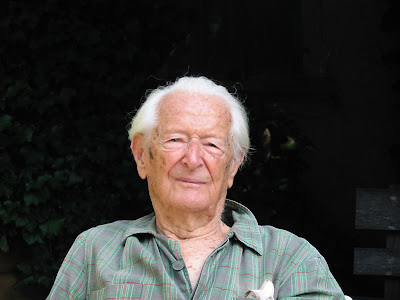