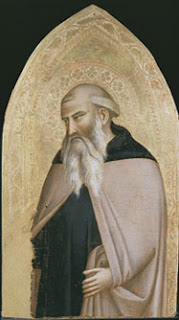 SOMETHING'S IN THE AIR

I spent a lovely Monday afternoon with my friend and Helicon Board Member, Joan Easton. We had lunch at her club on the Upper East Side and then took the six-gallery art walk recommended by Grace Glueck in the May 25, 2007 New York Times.

The show at Richard L. Feigen & Co., 34 East 69th Street, was remarkable. Titled, "SUBLIME CONVERGENCE - Gothic to the Abstract," the exhibition presents Gothic Christian panels with numinous 20th-century abstract paintings. (Image to the right: Taddeo Gaddi, Saint Anthony Abbot, circa 1345-50, tempera and gold leaf on panel) Entering the exhibition one is met with a Taddeo di Bartolo, Saint Simon, circa 1395, robes flowing aglow in pink and gold. Next to it hang two luminous Robert Ryman (b. 1930) abstracts of brilliant white, clouding into rich shades of blue near the edges. The effect was striking. "My God!" I murmured. Richard Feigen asks in his introductory essay, "How do certain basic strains of the human personality straddle seven centuries?" The attempt to represent ineffable human experience in tangible objects of art is the mysterious endeavor that unites mankind throughout history.

It is the effect I was after earlier this season with Helicon's 81st Symposium, The Art of English Song. By presenting Purcell, Britten, and Vaughan Williams together on the same program—in this case, sung brilliantly by the tenor, Nicholas Phan—I hoped to offer similar cross-century insights, and a few "My God!" moments, too.

Feigen closes his introduction noting, "So much of the focus today is exclusively on the contemporary. If this exhibition accomplishes its purpose, it will make earlier periods more accessible to the public." Ah, the contrast between the worlds of visual art and art music. While contemporary music fights for cultural relevancy, the contemporary art market is cash-flooded and super-chic. ("Drunk with money" is how Alan Riding put it in his article about Damien Hirst's diamond-encrusted skull in today's Times.)

Why can the purest abstraction on canvas be visually comprehensible and culturally relevant, while aural abstraction is met with such resistance? 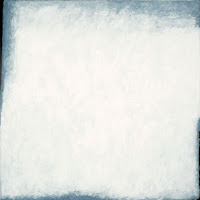 (Work to the right: Robert Ryman, "Series #9 (White)" 2004, oil on canvas, 53 x 53 inches, courtesy PaceWildenstein) The key is in the physical act of perception. Visual art is experienced as being outside the body. It can be consumed either by glancing or by staring. However intent the viewer's gaze, the painting stays fixedly on the wall. Music, on the other hand, is experienced inside the listener's head, right between the ears and behind the eyes. That's a very personal place. Though we see the musicians either near or far, the music they play doesn't stay with them, it goes right into us. Furthermore, music exists in time. If we don't like a painting, we look away. A piece of music, however, could last minutes, which easily feel like days if you dislike it. If you love it, even hours can evaporate, disappearing in the reverie of musical enjoyment. I remember feeling this way at the end of a Die Walküre performance at The Met. It's a very long opera, but as it was coming into the home stretch, I couldn't bare the idea of the beauty stopping. Even as it slipped from out my grasp, I tried to hold onto the impossible moment.

One of the pleasures of playing as often as I do with the New York City Ballet, is the rich body of Stravinsky's music in their repertoire. Works that stand (unjustly) just outside the symphonic canon, such as Agon, Symphony in Three Movements, Capriccio for Piano and Orchestra (which is part of Jewels), Orpheus, Jeu de Cartes, Apollo, and the Violin Concerto, are staples of this company. 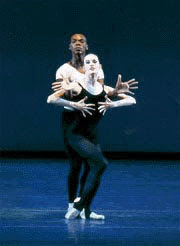 Stravinsky's Violin Concerto is one of Balanchine's great masterpieces, and as such is presented often by the company. The performances by concertmaster, Kurt Nikkanen are stunning for their virtuosity, lyrical beauty, and his obsessive realization of Stravinsky's detail-rich musical vocabulary. While playing this work, my ear is drawn to the many references to music of the past, particularly Bach. Stravinsky's counterpoint balances on the finest point (this is a ballet, after all) between mystery and meaningfulness. In the final movement there is an arresting duet between a protagonist French horn and demurely responsive soloist. (I loved the days when Paul Ingraham played the first horn part and his wife Jean played the solo. There could be no more touching version of this passage.) The horn line arches downward with so much longing as the violin line flutters, flushing with the attention. Yet, this utterly beautiful music remains essentially abstract, and the counterpoint mysterious in its particulars.

Fusing old and new music, Stravinsky created Janus-like pieces that sing in both forgotten and undiscovered tongues. Tropes of earlier music lead into unexpected expressive territory. A new language is inexplicably understandable, even as details of its dialect remain mysterious.
Posted by James Roe at 2:24 PM