When Christian Steiner first spoke with me about having Zéphyros open the 2007 series of Tannery Pond Concerts, he had recently attended a performance of the Berlin Philharmonic Wind Quintet that included Poulenc's Sonata for Oboe and Piano. He was so taken by those four unaccompanied notes the oboe sings at the beginning of the piece—high, arching, eloquently longing for something lost—that he envisioned this work as the perfect way to open the season.

Written at the end of his life, this work is both fragmentary and rhapsodic, boisterous with joy and abject in grief. Without the long melodies that make the sonatas for flute and clarinet so memorable, this work seems to actually be about the inner workings of memory itself. Poulenc changes moods with little warning, the way the emotions careen between joy and sorrow when faced with terrible loss.

Characteristic of the composer, the careening is not only emotional. Poulenc's musical language encompasses the sacred and profane, literally. Deeply dedicated to his Catholic faith, Poulenc writes an arresting passage in the beginning of the third movement in which the oboe intones a lamenting chant over sustained bell sounds from the piano. 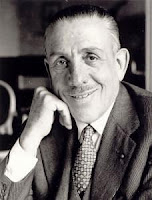 This incantation gradually losses its emotional composure spinning into a ululating climax of chromatic ornamentation. Poulenc understood wind instruments as well as any composer, and this passage perfectly marshals the oboe's capacities.

In his program notes for the concert, Clair W. Van Ausdall writes of Poulenc's "dazzling chic," a phrase I quite like. In the "trio" of Poulenc's Scherzo movement, he introduces a wistful cabaret song based on a melodic fragment by Prokofieff, to whose memory the work is dedicated. Lilting between 3/4 and 4/4 time, the melody is so songful, it's hard to believe there aren't lyrics. For Poulenc, the combining of cabaret and chant, the numinous and popular functions of music, is so utterly natural it must have come from deep within his own understanding of humanity and faith.

The musical rhetoric of this work is so direct and communicative, it was a pleasure to present it to a new audience. Performing with my dear friend Pedja Muzijevic is always a thrill.

Tannery Pond "Past is present"
By Andrew L. Pincus, Special to The Eagle

"NEW LEBANON, N.Y. — Who would have believed that a mere oboe and piano could evoke as much grief as there is in Poulenc's 1961 sonata?

Beautifully realized by oboist James Roe and Pedja Muzijevic, the work is a memorial to Prokofiev, who died in 1953. Between an opening elegy and a closing lamentation, the middle movement is a scherzo that clearly recalls the Russian composer's mix of irony and tenderness, including references to his "Romeo and Juliet" ballet.

As Clair W. Van Ausdall's always readable program notes pointed out, the work became an elegy for Poulenc himself when he died in 1963 without composing anything else. With warmth of tone and wide-ranging expressivity, Roe made his oboe all but speak of sorrow and loss."