Zéphyros joins our friend, Pedja—the second time this month—to open Christian Steiner's series, Tannery Pond Concerts. Performances are held in the Tannery on the grounds of Mount Lebanon Shaker Village and Darrow School, in New Lebanon, New York. It's a beautiful setting about 2.5 hours outside New York City. I hope you can attend. Click here for tickets.

The surprise guest on this program is Ludwig Thuille (1861-1907). A composer, pianist, theorist, conductor (of a male chorus), and most importantly a teacher, Thuille was appointed professor at the Munich Conservatory at the age of twenty-two. He went on to exert considerable musical influence in that city, drawing together a circle of composition students that included Ernst Bloch and was known as the "Munich School."

As a young man, Thuille was steeped in Viennese classicism, making the pairing of his sextet with Beethoven's quintet particularly apt. Under the influence of Richard Strauss, his musical language later incorporated bolder chromaticism and instrumental colors. Unlike many of his contemporaries, Thuille produced an impressive body of chamber music, and that is the genre for which he is most remembered today. His string chamber music recently has begun to be performed and recorded, however the Sextet for Winds and Piano—a great success from the time it was composed—is the work on which his reputation largely rests. Strauss admired the piece, and recommended it for the Beethoven Prize in Vienna.

As it turns out, Alice Tully also admired this piece. Some years ago, Zéphyros was on tour with pianist Charles Wadsworth. The Gavotte from Thuille's sextet was our encore. Charles recounted that when programming the Chamber Music Society of Lincoln Center's seasons, Miss Tully would say, "Don't forget that charming sextet by Ludwig Thuille. I simply love the third movement Gavotte." Indeed, the movement is utterly memorable. Its main melody is so natural and has such suggestive swagger, it could be a Gallic folk song.

Below are two photographs of Mr. Thuille. He was of Savoyard ancestry, and I must say, he is a handsome devil. Thinking of his Gavotte while looking at these pictures suggests quite a powerful personality. 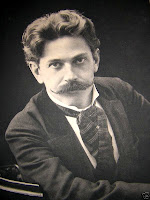