My friend, painter JOHN BRADFORD, has a show of new work at 55 Mercer Gallery (55 Mercer, 3rd floor). Stop by when you're in SoHo, it's a beautiful show of oil paintings on biblical (Old Testament) themes.

I love John's paintings and this show is very strong. With it, he returns a lushness to his images after several years of disciplined austerity and formal rigor. The work is sure-footed, as John is right at home in his favored subject matter. I was struck by the fecund, "Springness" of the colors. Everything feels alive, youthful, blooming, and bursting forth. The picture on the left is titled The Finding of Moses.

Here is R.C. Baker's review from his "Best In Show" column in the current Village Voice:

Here is the baby Moses, all quick pink daubs for arm and face, a blue cone for the servant bending over the tarred basket, lithe orange flourishes for bulrushes, and a gray column for Pharaoh's imperious daughter. Elsewhere, a dark interior frames a sunlit opening, these rectangles locked together by a blocky brazier with orange flames that echo nearby palm fronds. Two bodies lie in the gloom—a few deft strokes contrast a father's stumbling shock with Moses' stern, upright carriage as God's messenger. These 14 biblical scenes, painted with a drippy, Abstract Expressionist brio, are devoid of both fundamentalist didacticism and secular snarkiness, while beautifully evoking the imperfect humanity underlying the divine. 55 Mercer Gallery, 55 Mercer, 212-226-8513. Through May 19. 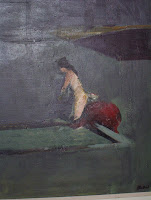 This is my painting by John. (Sorry about the glare from the flash.) It depicts Bathsheeba being bathed by a servant, but the unseen subject of the picture (to me) is King David gazing from a distance with his building desire and terrible plans to possess her. John has treated this subject a number of times, this version is from 1995. His practice is to delve into particular stories again and again, revealing new layers of meaning in each execution. It reminds of me Jacob wrestling with the angel, demanding his blessing. John doesn't let go of a biblical subject until he has received its mysteries, even if it takes years.

I purchased this picture on New Years Day 2006. I was having dinner with John and his wife, Melanie (a dear friend and fine flute player) in their SoHo loft. As the evening spread out, we looked at many of John's paintings, drank red wine, and talked and talked. What a way to inaugurate the year! And now this picture hangs above my reed desk.

Here are images of several other paintings in his current show:

Deaths of Nadab and Abihu 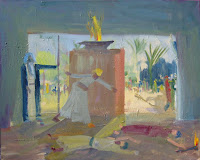 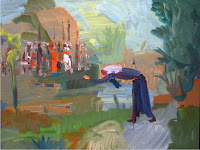 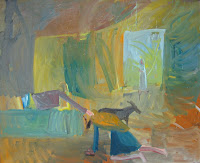