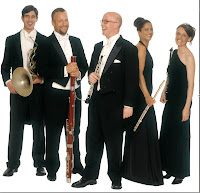 Zéphyros has a CD available through Cafe Press. It is live recording of Mozart's E-flat Major Serenade and Gounod's Petite Symphonie from a tour we did in 2006 with expanded ranks. The Mozart is scored for pairs of oboes, clarinets, horns, and bassoons, Gounod adds a single flute to the two-by-two line up.

We received this review from Ronald Klimko in latest issue of "The Double Reed."

"The Mozart opens the recording with verve and lots of spirit throughout. I particularly like the brisk, sparkling tempo of the Allegro finale. Both oboe soloist James Roe and bassoonist Doug Quint have nice spurts of dazzling technique at this tempo, and neither disappoint. Following this is Gounod’s lovely Petite Symphonie. I was particularly impressed with the Andante second movement, where both solo flutist Jennifer Grim and the ensemble accompaniment seem to be in perfect sync throughout — both phrasing wise and most especially dynamically. Bravo!

What is most impressive about this recording besides the excellent musical performances, is the high quality of the recording technique. The balance between all instruments is incomparably good — perhaps the best I’ve ever heard! It is as if one is sitting in the ensemble oneself, surrounded by these wonderful performers — quite a sensation!" 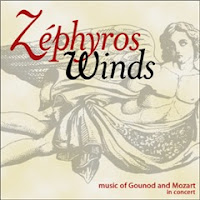 “At eleven o’clock at night I was treated to a serenade — and that too of my own composition. These musicians asked that the street door might be opened and, placing themselves in the center of the courtyard, surprised me, just as I was about to undress, in the most pleasant fashion imaginable with the first chord in E-flat.” [W. A. Mozart, Letter to his father, 3 Nov. 1781, describing a spontaneous performance of his Serenade in E-flat Major, K. 375.]

Mozart’s works for large wind ensemble exist in two worlds at once, the useful and the sublime. This dichotomy describes the relationship of the composer’s own genius with the time in which he lived. A working musician who needed to make a living, Mozart wrote useful works and fulfilled commissions, yet the immense power of his imagination placed his creations on a level far beyond the reach of his coevals.

Mozart wrote three large works for harmonie, or wind ensemble, the Serenades in E-flat Major, K. 375, and C Minor, K. 388, and the “Gran Partita” K. 361. Each is a true masterpiece of chamber music and there are no greater works for winds written before or since. The being said, their genre is that of occasional music to be played outdoors or accompanying a dinner. A leading Beethoven scholar noted of classical-era wind music that, “out of doors it sounded better than strings; indoors it could hold its own against the clatter of dishes.” Today, in the same way that we find “useful” items from previous centuries honored as works of art in museums, Mozart’s sublime wind serenades rarely now have to compete with plates and glasses to be heard.

Nevertheless, in the concert hall, these works bring their origins with them, especially K. 375. The euphonious sound of the paired winds and the open, informal nature of the writing give the music a convivial, social, and happily “ad hoc” quality. In Zéphyros’ approach to this work, we capitalize on these qualities by inviting our friends to expand our ranks. (It doesn’t hurt that we know such fine wind players.) And though invisible on CD, we stand for the performance of the Mozart serenade, much like those performers mentioned in Mozart’s letter who caught him at home, about to get undressed for bed. Could there be a more charming tribute from performers to composer or a more apt expression of the dual worlds this music inhabits? The informal and sublime proceed from a single E-flat major chord.

Charles Gounod’s position in the musical cannon is assured by his operas, “Faust” and “Romeo and Juliet,” but it was a creation of a meaner sort that gave the composer worldwide fame. Gounod’s little piece of musical “vandalism” (not unlike Marcel Duchamp's L.H.O.O.Q. in which he drew a mustache on a reproduction of the Mona Lisa) was the superimposition of a sweetly sentimental “Ave Maria” over J. S. Bach’s Prelude in C from Book One of the Well Tempered Clavier. Somehow, one can hardly hear the latter without the former insinuating itself, softly, into memory’s ear.

The cultural penetration of Gounod’s little addition is demonstrated in a story told by harpsichordist, Juilliard professor, and friend of Zéphyros, Albert Fuller. In the 1980s a contingent of music teachers from the Beijing Conservatory visited the United States as a part of a cultural exchange. While in New York they were hosted by Mr. Fuller in his apartment a few blocks from Lincoln Center. When asked to demonstrate one of his new harpsichords, Mr. Fuller began to play Bach’s famous C Major prelude. Without further encouragement, his Chinese visitors intoned Gounod’s “Ave Maria.” There being nothing else to do, Albert continued playing Bach while his guests sang Gounod to the end. East and West, China and America, German Baroque and French Romanticism all co-mingled that night in a way the music’s creators (most especially Bach) could never have imagined.

Gounod’s “Petite Symphonie” for winds was written for the Parisian flute virtuoso, Paul Taffanel and his Societé à des Instruments à Vent. As with much of Gounod’s output, the slow music is the most memorable. The expansive opening chorale exploits the blended wind timbres to their richest capacity. The moving ”Andante cantabile” is the emotional centerpiece of the work and acts as an opera aria for flute soloist. The rest of the work exists in a lighthearted world of French insouciance.

This work is not heard so often on the concert stage today, so it has been a particular pleasure for Zéphyros to present it to audiences. Backstage at the storied Dumbarton Oaks in Washington, DC, we needed to unify our phrasing concept in the opening of the first movement. Rather than play our instruments and risk giving the audience a sneak preview, we decided to sing our parts instead. Before long all nine of us were at full voice—as if sitting around a piano bar—singing the familiar and beautiful melody we’d all played since we were students. Though we never found out if the audience heard our vocal version, we try to bring that same natural singing quality to the work every time we perform it.