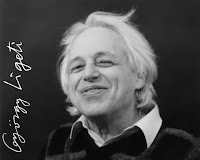 ''I am in a prison. One wall is the avant-garde,
the other is the past. I want to escape.''
György Sandor Ligeti
(1923-2006)
On tonight's Movado Hour concert, Zéphyros will perform Ligeti's Six Bagatelles for Wind Quintet.

On June 12, 2006, the music world lost one of its most compelling and innovative voices when Eastern European composer, György Ligeti died in Vienna at the age of 83. With a career that began under Soviet oppression in post World War II Hungary, Ligeti earned a worldwide audience when his music was used for Stanley Kubrick's movie ''2001: A Space Odyssey'' in 1968. As Paul Griffiths wrote in his New York Times obituary, “The moon music was indicative of only one of [Ligeti’s] expressive modes. After fleeing Hungary in 1956, he also showed himself to be a master of a fast, mechanical and comic sort of music. Between these two poles -- the ''Clocks and Clouds'' -- he created works of exuberant variety and range.”

His Six Bagatelles for Wind Quintet were written while still a young man in Budapest and combine, in his words, “Bartok with a little Stravinsky.” Originally composed in 1951 as part of an eleven movement work for solo piano, Musica Ricercata, Ligeti extracted six of the movements to orchestrate for winds in 1953. Though to today’s ears this music is hardly shocking, the Hungarian government banned a complete premier in 1956 citing chromaticism dangerous to the public. The work finally received its first complete performance in Stockholm 13 years after its composition.

Though the title suggests trifles—mere bagatelles—these six movements are diminutive in length only, the longest being three and a half minutes and most clocking in at just over 60 seconds. As in a Baroque suite, each movement expresses a single musical ‘affect’ or mood, and like any good distillation process the results are intense and memorable. The moods are varied and encompass playfulness, grief, contentment, and utter craziness. Before you’ve gotten used to one, the next appears.

Photo of Ligeti as a child.
Posted by James Roe at 3:04 PM