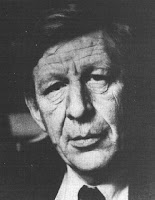 In my twenties, I began to read poetry, I was going to say, "seriously." It wasn't that I was always so serious, but I wanted to find in poetry as much as I could, I hoped as much as I found in music.

I was reading criticism (for fun . . .), and came upon John Hollander's delightful "Rhymes' Reason." There's no more charming introduction to poetic techniques. I then read Alfred Corn's "The Poem's Heartbeat: A Manual of Prosody" and Timothy Steele's "All the Fun's in How You Say a Thing."

To test whether I was actually grasping the material, I decided to write a little "undergraduate" essay looking into the metrical properties of a particular poem. I was reading Auden at the time and picked, "The More Loving One." It seemed straight forward enough, though the amusing sixteen lines turned out to offer some interesting surprises.
•
The More Loving One, by W. H. Auden

Looking up at the stars, I know quite well
That for all they care, I can go to hell,
But on earth, indifference is the least
We have to dread from man or beast.

How should we feel were stars to burn
With a passion for us we could not return?
If equal affection cannot be,
Let the more loving one be me.

Admirer as I think I am
of stars that do not give a damn,
I cannot, now I see them, say
I missed one terribly all day.

Were all stars to disappear or die,
I should learn to look at an empty sky
And feel its total dark sublime,
Though this might take me a little time.

Meter and Meaning in Auden’s “The More Loving One”

With poignant charm, W. H. Auden’s, short poem, "The More Loving One," deals with the ambivalence of affection. Auden uses metric manipulations to illuminate this theme while creating a pleasurable and varied aural experience.

The poem’s meter is iambic tetrameter (each line containing four feet of two syllables, the first unstressed, the second stressed) with four stanzas of quatrains, each of paired rhyming couplets. From the very beginning of the poem, Auden’s theme of the ambivalence of affection is foreshadowed by ambiguity of meter. The first three lines of the poem scan with equal numbers of iambs and anapests (a three syllable foot with the stress falling on the last syllable). Not until the fourth line does it become apparent that the poem’s meter will be primarily duple. Anapestic substitutions, which are peppered throughout the poem, lend lilt and folksiness, but as with the metrical ambiguity of the first three lines, Auden uses these metric substitutions as an expressive device.

Though he largely conforms to the convention of substituting no more than two feet per line, Auden makes one exception to this rule with effective expressive results. Line 6 consists of three anapests followed by an iamb.

The anapestic triplets tumble quickly across the page with the mounting passion of the stars. Our disappointing response stops the rolling anapests with an abrupt final iamb, “return.” In this case “return” is what we cannot do with the burning passion from the stars, but we do “return” to the prevailing iambic meter.

The third stanza contains further metric and rhythmic manipulations that express the narrator’s growing realization of his indifferent relationship with the stars. In three of the four lines, the caesura falls within metric feet, off-setting their rhythmic flow. The first and third lines of the stanza are enjambed, obscuring the feeling of line breaks. This also deemphasizes the rhymes, an essential element to hearing a poem’s meter. Auden’s most interesting metric substitution of the poem occurs in the last line of this stanza where he uses a double iamb, or a pyrrhic-spondee combination (two duple feet, the first with two unstressed syllables, the second with two stressed syllable) to wonderful expressive effect.

This line may scan a number of ways, especially if one opts to hear four levels of stress rather than my choice of two, but I prefer the scansion above because of metric considerations in the rest of the stanza and the expressiveness of the pyrrhic-spondee combination in this context. Here, the substitution’s effect is heightened in contrast to the three perfect lines of iambs preceding it. Though Auden uses anapestic substitutions throughout the poem, he notably doesn’t use them in this stanza even when he could. The choice to offset the metrical substitution in the last line of the stanza with constant reiterations of iambs before it even causes grammatical ambiguity which could have been avoided if the expressiveness of the final substitution didn’t outweigh other considerations. The third line of the stanza, “I cannot, now I see them say,” scans as four perfect iambic feet. The phrase “now I see them,” though not without its conversational informality, would be clearer if the word “that” were inserted. The line would then read “I cannot, now that I see them say,” and would scan as iambic tetrameter with an anapestic substitution for the third foot. However, Auden saves all the metric surprise for the last line, where it will have it most expressive power as the narrator realizes that he has not, in fact, missed the unseen stars “terribly all day.” Auden’s withholding of the expected iambs at the end of the line punctuates this realization.

To this point, Auden has not made extensive expressive use of alliteration, but in the final stanza, he enriches the sonic palette with a pair of repeated consonants in each of the first three lines. These three alliterative pairs, two d’s in “disappear or die,” two l’s in “learn to look,” and two t’s in “total,” correspond to each other through the physical action required to pronounce them: the repeated drawing of the tongue to the front teeth. Further examination of these consonant groupings reveals a layer of meaning expressed through rhythm. As the lines progress, each pair of consonants is separated by fewer syllables, mirroring the disappearance of stars described in the stanza. The d’s of “disappear or die” are separated by three syllables, the l’s of “learn to look” by one, and the t’s of “total” are consecutive. The total lack of stars is emphasized by the disappearance of syllables between the repeated consonants in the word “total.” To cap off this disappearing act, Auden redraws the reader’s tongue to the front teeth one more time on the word “dark.” The consonant “d” echoes back to the beginning of this process three lines above and gives finality to the “total dark sublime.”

A final anapestic substitution in the poem’s last line,

stretches the rhythm just at the point when the narrator takes pause to reflect. Auden gives the narrator "a little time" with an extra unstressed syllable. Auden’s readers may take a little more time to reflect on his poem’s themes. 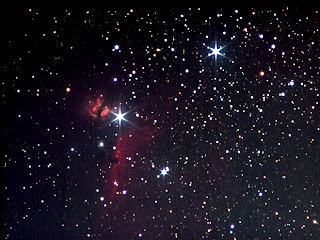