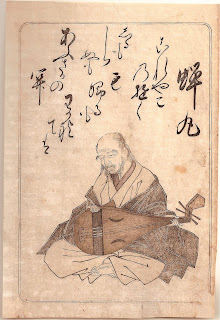 In 2006, I went on a tour of Japan with the New York City Opera. While in Tokyo, members of the orchestra introduced me to a print dealer they knew from previous trips.

He showed me a group of 18th-C. images by Katsukawa Shunshô (c. 1726-93), from his version of 100 Poems, 100 Poets series (Ogura Hyakunin Isshu). They are pages from a book published around 1775. Utterly new to this sort of work, I was taken by the combination of the poet's portrait with his words unfurling in the air above his head. Shunshô is particularly known for his personal rendering of faces. (Click on the image for a larger version.) I found these pictures so expressive and the old paper on which they were printed so delicate and full of character that I couldn't resist them.

I took all he had and gave many to friends. I kept five and will post them individually, starting with number 10 in the series, the blind biwa player, Semi Maru. Son of a ninth century emperor, his affliction made him ineligible for the throne, so he retired to a small hill and wrote poems and played music.

These poems are examples of tanka, a 31-syllable form comprising the pattern 5-7-5-7-7. I found three translations.

The stranger who has travelled far,
The friend with welcome smile,
All sorts of men who come and go
Meet at this mountain stile, --
They meet and rest awhile.

Truly, this is where
Travelers who go or come
Over parting ways--
Friends or strangers--all must meet:
The gate of "Meeting Hill."

This is a place where
Many come and many go,
Part to meet again,
Some as friends, some as strangers:
The Ōsaka Barrier.

The antithetical pairings in this poem: "come and go," "part and meet," "friends and strangers," give the feeling of footfalls leading to the Osaka gate. The site described, Ōsaka no Seki, is a small hill on the edge of Lake Biwa, not far from Kyōto, where Semi Maru lived. It was a common poetic subject.